Historical Project Mod - Version 0.3.8 (Checksum SQIZ). Not save game compatible. I couldn't include everything I wanted. There's quite a few things fixed or changed, and some stuff (like rebels) were reworked from the ground up, so I had to release it sooner rather than later. There's a few new tags to stop assimilation/represent colonial nations, and there's a few changes to how pops assimilate in accepted cores overseas. There's a new union tag (Antillean Confederation) among other things. Another main thing is the beginning of the segregation rework, whereas colonial/former colonial nations choose how to deal with the africans and native americans. So far only the native americans are done. There's more stuff that I'm probably forgetting but the changes are too much, and a lot of work went into optimizing some old stuff too, so read the changelog if you are curious. Oh, "african minor" doesn't exist anymore. 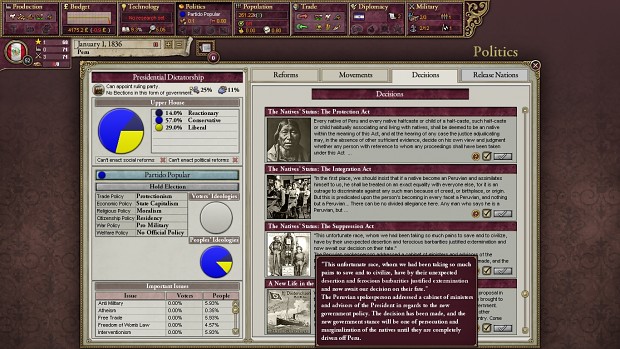 alot of changes, ty for the hard work ^_^

Why does Yemen have the same culture as Syrians/Iraqis, when Egypt has a completely separate culture? Hejazi's, Yemenites, and other urbanized Arabian peninsula peoples, should have their own culture, outside of "Bedouin". Already linking "Syrians" with "Iraqis" is a bit tenuous.

That's mostly how vanilla does it. Cultures are usually a catch all group for a common history and values, and they do have that. Iraq and Syria are modern divisions.
The only ones that could possibly have a different culture would be the groups of different religions such as the Shiites and Christians, since their culture and historical links are different from the Sunni ones, but they would still be linked between themselves through their religion.

Iraq and Syria are modern countries, but culturally one cannot say that all the people of Arabia and the Mashriq (Iraq/Syria) identify as one (especially if you have Egyptians as separate). Urbanized people from the Arabian peninsula (Yemen/Hejaz), really should be different culturally from the urbanized populations of Syria/Iraq. This is to say that the Mashriq group really should be broken up between "Bilad al-Sham" and the Arabian peninsula.

As for Shi'ites v. Sunnis, that would be pointless, since these divisions themselves are more modern than anything. Plenty of Sunni's practice what are today "Shi'ite" customs, and vice-versa, the line is very often is not clear, and Shi'ites are not a homogenous group either.

I'm a bit confused. Is it normal that my people import goods that I can't sell?

Will you be adding any extra perks or drawbacks for certain religions like you did for Islam? I think it might be interesting to have extra modifiers like this:

For Animist Nations:
There's a hidden modifier like for Muslim nations which gives them maybe a -5% or more research drawback as with adding ruling party support and making their pops more reactionary. Unlike Islam, this modifier couldn't be revoked through decision and you'd instead have to change religion through missionaries. This would further incentive nations to ask for missionaries as well.

Speaking of missionaries, I'm not sure if this has been changed since I haven't played as an Animist, Hindu or Buddhist nation since the new update, but Ive never gotten the ability to change religion, which foiled my plans of establishing a Crusader Vietnam ;). I also think it would make more sense for only liberal and conservative governments. If my grievances have already been addressed, however, just forget I asked ;)

I'm also wondering if it would be possible to change the religion of China and Korea from Mahayana to Confucian given that both these countries were ruled by Confucian elite and not Buddhists. Buddhism would still be present, however, obviously. I would also recommend adding animist pops to Korea to present Muism, but I can't seem to find statistics regarding the numbers of adherents. I wonder if adding in Zoroastrianism in Gujarat instead of the animist pops could also be arranged, and add in a decision to convert to Zoroastrianism for Gujarat like how Bhotan can convert to Yazidi (That would have been incredibly unlikely, however). I'm not a programmer, however, so if you don't know how to add in religions, I understand fam.

Thanks for reading, sorry if I'm annoying or have totally outrageous suggestions, I just have a lot of ideas and I figure I may as well pass them by you to see if they'd be realistic. Keep up the great work!

Hi! The mod is great, thanks for the great job you 've done!
Some friends and I have been thinking about playing a multiplayer game with the mod, but we can't get the same checksum. None of us gets the "SQIZ" checksum either. ¿How can we solve this?

I think the Steam checksum of the mod is different from the one I post here because the steam version is slightly different. As long as you all have the same checksum and as long *** everyone's vanilla checksum is WNVU, it should be alright.

You really are the best!! Thank you so much for all of your hard work. It means so much <3

Thanks for the kind words.

Why does Alaska's culture remain as "Alaskan" if it is sold to Japan? Surely this would mean that if Japan releases Alaska at some point, the pops there would start integrating from being Japanese to being "Alaskan"? It is a little ambiguous as to what this would mean if the "Alaskan" culture is also being used for Russian pops. Speaking of which, how would Russian migrations to Alaska work now? Do the pops automatically become "Alaskan"? And what would happen if a Russian immigrated to Alaska while it is a Japanese client state? Would "Alaskan" refer to both Japanese and Russian pops there?

Perhaps I am misunderstanding this. Could you please explain?

"Do the pops automatically become "Alaskan"?"
No, only if the country is free. If it becomes free, then they will become Alaskan.

"Would "Alaskan" refer to both Japanese and Russian pops there?"
Yes. It could even refer to british culture. Since it's a place that's sparsely colonized, it is "easy" to change their main culture. Less people, lack of a cemented tradition/history. Alaskan represents the culture of the colonizer in the new world nation, be it british, russian or japanese.

Ah, so it's meant to be a sort of melting pot culture? I think I understand... Thank you!

could you add aromanians to the game?

Explained in another comment:
Aromanian is an ethnicity. Culturally, they adopted the host nation's culture. "So much did they become identified with the host nations that Balkan national historiographies portray the Aromanians as the "best Albanians", "best Greeks" and "best Bulgarians", leading to researchers calling them the "chameleons of the Balkans"
So their culture is the same as the host nation.

you're speaking with an aromanian right now.
Wikipedia is not a good source to get your information from to begin with. Aromanian is much more than an ethnicity, and it should be represented in the game. Of course we have our albano-greek similarities due to our hundreds of years of repression ( even now, we're not allowed to speak aromanian in greece! ), but we were mostly very isolated people, living on the mountains, so we were hard to interact with and to be integrated. We have our own "national" food, along with our own dances and customs. Our language has a big chunk of greek words in it, but even a romanian could understand it.
By the way, we once nearly formed our own country! Too bad the ottomans destroyed our dream ...
I have alot to tell you , and i could do a pastebin with some changes which i may mod myself. Just lemme know.

@[arkhometha](members:arkhometha:673053) I don't agree with that. They are still a part of the Romanian culture. If you add them you should add them to the Pan Romanian culture in the game. I hope you can check my comment at version 0.3.8.3.