Historical Project Mod - Version 0.3.7.1 (Checksum ZIVJ) for HOD 3.04 Quick hotfix to fix a bug that made the Netherlands spam a decision and get infinite prestige. It's full version, no additional downloads needed. NOT Save Game Compatible (even with 0.3.7). 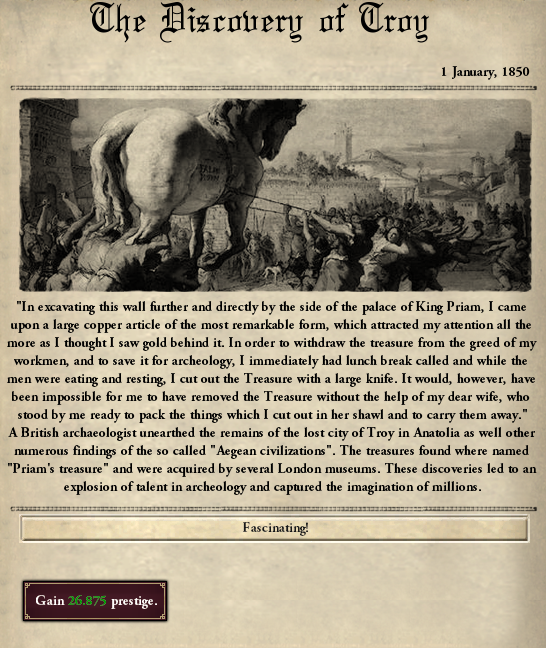 I'm glad to see that this project is alive, I was reading about the last version and suddendly I see "0.3.7.1" "17 hours ago", It´s dificult to find a mod of Victoria II that keep improving itself and that is in such a good state.
I was playing with the PDM Mod, and his Submod "Concert of Europe" but when nobody keeps alive the mod, errors remain unresolved and opportunities are left unexploited forever...
I'm going to give it a try, it will surely be a good experience and many many hours of fun!
Greetings from Mexico and I hope the project continues as well as now ;D

Thank you for the active development! You guys are doing an amazing job!

Thanks for the kind words

I came here looking to replay Vicky II with added flavour from mods. I left with a smile on my face, seeing your ironclad determination to keep modding for this game.

Thanks for making my day.

hello! are you planning on adding aromanians in the balkans as well? by some census, they were at least 100,000 individuals in greece,albania and the ottoman empire combined.

Aromanian is an ethnicity. Culturally, they adopted the host nation. "So much did they become identified with the host nations that Balkan national historiographies portray the Aromanians as the "best Albanians", "best Greeks" and "best Bulgarians", leading to researchers calling them the "chameleons of the Balkans"
So their culture is the same as the host nation.

That decision is for the DNB (Danubian Federation) only.

First of all, thank you so much for keeping updating this great mod, got me a little worried there.

I'm not sure if you saw my message, and I'm probably bothering you, but what do you think of that Polish border thing? Is it plausible, is it a terrible idea?

I'm terrible at keeping track of all the messages and it usually takes too long. Plus I don't come here often, only to update the mod. I will take a look and answer your message, sorry for the delay and thanks for the kind words!

My checksum is GAJL despite re-installing and all other attempts?

Steam checksum is different from non-steam version IIRC, the checksum I give is non-steam. Shouldn't be that way though, as long as your vanilla checksum is WNVU you should get the same checksum but I don't know, I didn't test it in the steam version.

This mod is the only way I can play Victoria now, and for that, we thank you.

I have a few suggestions for some stuff in the New World.

So my suggestions are these:

1. Filibuster War
I was thinking there could be a event around 1856 for Nicaragua which makes the country a Presidential Dictatorship, sets Yankee to the primary culture with C. American as a secondary one, and makes slavery legal. Some Yankee pops could also be moved from somewhere in the U.S to Leon, Managua, and Rivas. Honduras, Costa Rica, El Salvador, Guatemala and Los Altos then get an event to intervene in Nicaragua to overthrow Walker. All of the countries involved get a draft modifier which lets them draft a large amount of their population. If the C. American coalition wins, then Nicaragua becomes a democracy again, all of the winning countries gain prestige, slavery is abolished, and C. American is made the primary culture of Nicaragua again while Yankee is removed. If Nicaragua wins, however, then they could get a decision to join the United States. Doing so gives America cores on all of Nicaragua including Bluefields.

2. Gran Colombia
Historically, Gran Colombia wasn't just Ecuador, Colombia, Panama and Venezuela. It also at one point effectively controlled Peru and Bolivia, and the Dominican Republic tried to join in as well. So my suggestion is for Gran Colombia to gain cores on Santo Domingo and La Vega if their military policy is jingoism, have at least 60 prestige, and is a great power or if they are a fascist dictatorship. They could then also get cores on Peru and Bolivia if they have a jingoist military policy, have prestige higher than 100, have a fascist dictatorship, have invented romanticism, and have invented Revolution and Counterrevolution.

3. Accepting the African Diaspora
My thoughts for this would for this to be like the decision to accept Native American cultures only for the black cultures of New World countries. The criteria would be the same as accepting the Native Americans, and the country choosing it would gain whatever black pops they have in their territory as accepted (So Afro-American for America, Afro-Latino for Peru, Afro-Brazilian for Brazil, etc. etc.). I think that both the Native American and African Diaspora decisions should be modified so that it's required for pops of either your primary or an accepted culture are in all of your core provinces, as I have found it impossible for America to accept the Native Americans as there aren't any yankee pops in the South.

4. Haiti
Small change, but I think there should be two decisions for Haiti:
First decision should be to establish a monarchy under Faustin I. This is already an event, but I think it would be better to make it a decision.
Second decision would be something to add Caribeno as an accepted culture and would end the racial tensions on the island.

5. Adding Suriname and Counani
In the game, Guyana is the only country represented in the British, French and Dutch colonies in South America. I think adding cores for the nation of Suriname for the Dutch provinces and cores for the country of Counani in French Guiana would be a nice touch. Counani is not an actual nation, but was the name of a self-declared nation in the Macapa province of Brazil which wanted to join France, so I think this would be a fine name for the nation occupying French Guiana.

6. Caribbean Federation
I feel like this has to be here given how you can make some sort of union as the other countries in Latin America (Except Chile, Brazil and Mexico). Basically, it would allow any country in the Caribbean to form the Caribbean Union/Federation which would unite the Caribbean islands. This could also be formed as Guyana, Suriname, Counani, or Belize, as they have historically been considered a part of the Caribbean. The decisions would give them cores on all the islands in the Caribbean as with Guyana and Belize. Afro-Caribbean, Caribeno, Afro-Antillean, and Afro-Latino would be primary cultures. Haiti can only form it after selecting the decision to add Caribeno as an accepted culture or after losing the Dominican Republic.

7. Allow Chile to reform the Peru-Bolivian Confederation
Self-explanatory. I just find it weird how Chile can't form any country, so I think them being able to form the PBC would make some sense and add some more flavor to Chile. If Chile still won't be able to form the PBC, however, I'd still like to see some more decisions/events regarding Chile in the future.

Also, a bug I've found is that Scotland has 'Scottish' as their only culture yet there are no Scottish pops, and Occitania doesn't have any Occitan pops.

If you've come this far, then thanks for reading, you're awesome :D

Also, Bali is Animist when it was ruled by a Hindu Kingdom as of 1836, and I notice that as India, whenever I click a decision to organize an African state like Tanganyika, Uganda, etc, it makes the religion Sunni instead of Hindu.

I will fix the Sunni bug, but it's related to how I can't check a country true religion so it checks for the majority religion in the capital.

1. I will do something about the fillibuster expeditions at some point, I just don't know when.

2. That's a good irredentist decision for Gran Colombia. Noted down, thank you.

3. That's something I'm tackling with the new segregation mechanics, but it will be in update 3.9. More interaction with segregated cultures.

4. Adding Caribeno as accepted would kill the nationalistic desire of the Dominican Republic, not to mention they come from different colonial backgrounds. Haiti won't get them as accepted, and I think an event works just fine for the monarchy.

5. At some point I will probably do something about Suriname, but first I need to solve theirs (and Guyana's) culture as of now they are an african-diaspora country and that needs to change.

7. Not every country needs a formable nation. Chile won't be able to reform the PBC. They will have more flavor in the future, especially in regards to a reworked pacific war.

Scottish pops spawn in their capital and is supposed to slowly spread from there. Their capital flips to scottish after an event fires.
Occitania is flipped if you pick the option for Occitania to spawn in the new options menu.

Thanks for the suggestions!

Thank you for the super mod. I was really happy when I saw the update!

are there any methods for getting a save game from the mod? Wanted to covert my save to hoi3 and lead the Toucouleur Empire into World War 5

Manual converting is the only option. Sorry.

Only one thing I hate the most. Germans with and without mod are too OP!!! Yes, they were very powerful but come on. Germany vs France, Italy and Russia and they still can't lose? Too powerful!! On the other hand I love this mod very much, good job.

The problem here is that the AI France usually station their soldiers in Africa while AI Russia leaves them in Siberia while Germany, which rarely has colonies, doesn't.