OS users of XP systems, and mortal Fans of First Sandbox, prepare yourself for galactic massacre in this unending galaxy of fighting. - After defeat of Satan forces in Serbona sector (version 4.3 ), by Serbian Mercenaries and destroying warp-gate with anti warp-gate weapon, ..Zonomorfs scouting around the borders of Larkin sector for weeks, finally decide to attack. ..Using weaknesses in defense of Apollo tachyon web, ..penetrates and attack quadrant in full force, brutally. - Zonomorf race, ..as race, ..actually have a billions of systems at their disposal, and attacking this galaxy is a procedural matter for them, ..to be clear with this. But this action triggered premises in hearts of other ( ..a free worlds), ..and Serbian Mercenaries returned once again to fight for freedom (and reputation), .. and yet, ..yet ..maybe, ..maybe ..for whole cosmos, who knows ...Hearts of eternity, ..yea who knows this things .. who knows .. 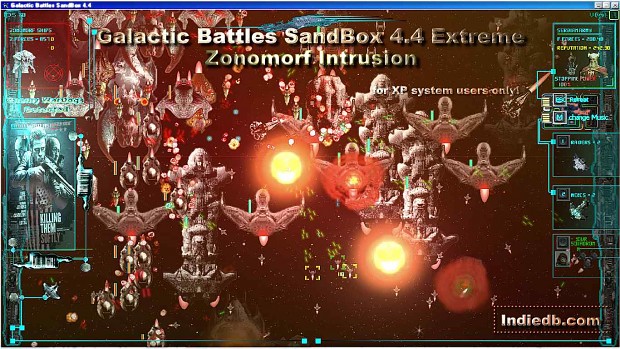 Piece of advice here, ..make sure to have sufficient number of anaconda, jaguar and player squads in fighter missions and Raiders and Merc Mambas in heavy capital ships battles at your disposal, or this will be a short journey.
Testers for this version are old guard members:

..it appears that fps regulator not forking, locked at 60 and 70 fps, will be fixed next time ..but 60 fps is real speed ...i played with 70 fps on resolution 1024x768 and things run very fast, this kind of forced action is only suitable for approved mental patients, if you know what i mean ..