Calradia 1050 A.D. Mercenary Uprising V. 3.0 is built on the following major modifications for Warband: * Diplomacy 4.2. Credit: Waihti, hessuu, fisheye, rubik, jrider, Mjöllnir, Akmar Nibelung and zParsifal * Pre-Battle Orders and Deployment (PBOD).92 including Formations (with some code from PBOD .96 to fix an opcode error). Credit: Caba`Drin (PBOD) & motomataru (formations). * Freelancer 1.51. (with several fixes from Floris 2.55 and some modified code by me). Credit: Taragoth for original code and Floris Mod Team for fixes. * JacobHinds improved morale and routing system code. This replaces the morale and routing code in the Formations code. Credit: JacobHinds at Taleworlds Forum. * Three added factions (Keltons, Khergiz, and Geroians). Credit: Redleg * My own modification of troop recruiting including town and castle recruitment and manor recruitment as well as customizable troops. Credit: Redleg, modified code by Laszers and by Bismark.

This is a full standalone version of Ver. 3.0. Earlier versions of the mod are not needed. This version is a re-compressed version (using 7-Zip) to deal with possible corruption in either compression or extraction that some players have experienced. This re-compressed version also includes an LOD fix for one of the Sarranid shields.

To install this version, extract the “Calradia 1050 A.D. Mercenary Uprising V. 3.0 Full” zip file and copy the folders and files into your Warband Mods folder. This mod will work with Warband versions 1.166 and higher. Please note that this version is not save-game compatible with previous versions, although you may import a character used in earlier version.

Version 3.0 is a full standalone mod that is built from Version 2.52 but is not save-game compatible with Ver. 2.52. Ver. 3.0 incorporates both of the Ver. 2.52 patches and a number of other changes. The changes below reflect only those made for Ver. 3.0. Previous version changelists are shown in their respective pages.

Known Issues (none new to this version) 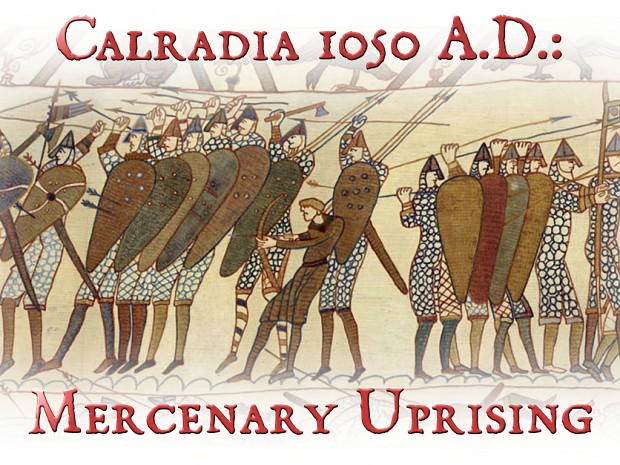 Very nice! Congrats on the release!

Congrats on the release, but my game asking a CD-Key when I start. Is there a solution for that

I have no idea. Are you playing through Steam? Which version of Warband are you using? Did you install the mod into the Mods directory?

I have posted an alternate module.ini that might work. Try it out and let me know.

Congratulations on this new release, can't believe it has been almost 5 years since this mod first appeareance lol

I can't believe it has taken so long to get to this point. I guess I have enjoyed playing the mod more than I have enjoyed modding it. It's a good thing I don't work for a brewery.

Haha, at the end of the day it's a passion project, and we are lucky to reap your results.

Jaja dont worry, the mod is great so i kinda understand why
just take your time since the mod is very playable in this state

It's asking for a Viking Conquest serial key for me to be able to play the game, why is that happening?

Use the alternate module.ini file I uploaded. Rename the file to "module.ini" and copy it to the mod's main directory, over-writing the original module.ini.

Redleg nice work and must say good job coming this long way and still working on your mod.played it since beginning -gorgeous done- so 2.52 is obsolete?