This singleplayer map has been archived by the uploader because it is out of date and no longer supported. We recommend you browse the file list for the latest singleplayer map.

This is a STAND ALONE MOD miscategorized as addon Addresses Victoria's late game economic liquidity problem for Vanilla. Code from NGTR-HPMpatch by Bearhobag of Reddit Originally presented as an economic improvement patch for Victoria 2 HPM (Historical Project Mod) by Bearhobag but adapted for Vanilla. As per results of Bearhobag of Reddit's empirical studies of saved Victoria 2 games: "a major problem with Victoria 2 is that above 90% of the total money pool ends up trapped in national treasuries" "Money doesn't reach the general population. Without money, they can't buy goods. Without demand for goods, factories can't make a profit. Without profitable factories, industrialization can't put money into people's pockets. Instead of roaring into Fordism, Victoria 2's Industrial Revolution tends to fizzle and fail." "I'm not saying this fixes the game, it's just what I've decided is "good enough".

Originally presented as an economic improvement patch for Victoria 2 HPM (Historical Project Mod) by Bearhobag but adapted for Vanilla.
Files are altered from HMP to NGTR and HMP content removed for Vanilla.

What this does:
Addresses Victoria's late game economic liquidity problem for Vanilla.

As per results of Bearhobag of Reddit's empirical studies of saved Victoria 2 games:

These areas are addressed for Vanilla by this mod:

1--Governments don't hoard money in their treasury anymore , instead they lower taxes and even return money back to their POPs if treasury amounts exceed £400,000.

2--Factories pay out 60% of their profits to employees/managers, as opposed to 30%.

3--Gold income mainly goes to governments instead of laborers(the former recirculates it, the latter hordes it in banks). 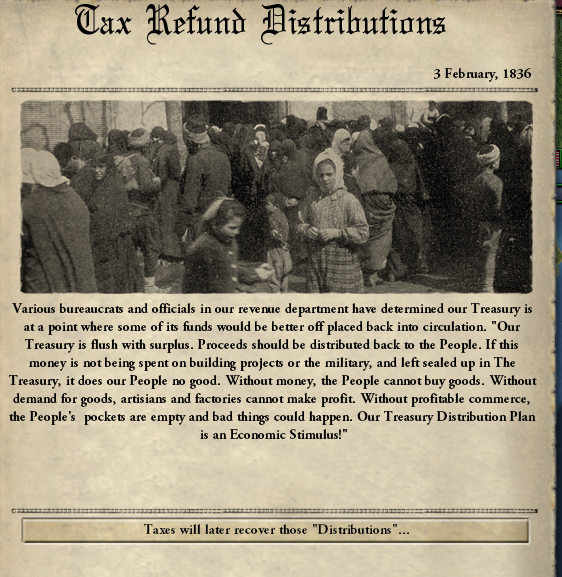