Reports are coming in from the Port Authority about a bizarre attack on the Harbour. A number of cargo containers were offloaded from a cargo vessel belonging to a London Biotech researcher. According to one of the surviving dock workers, they had barely offloaded half the containers, before they starting bursting open, one after the other. There were things inside .. They looked like out of a slasher flick. Everyone at the harbour is dead, and the police have been advised to stay out. It's our job to wipe these things out. 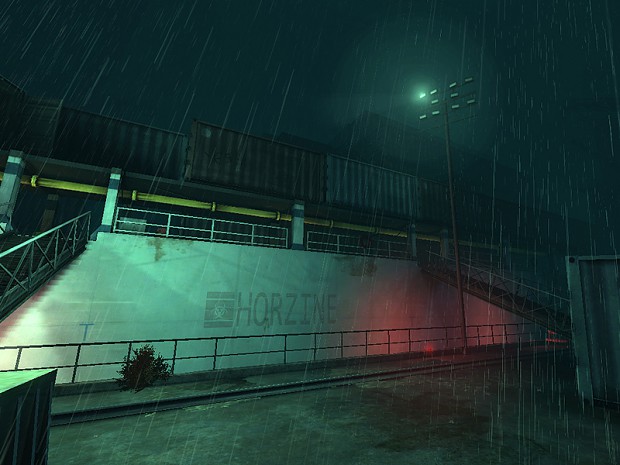 I seem to have a problem with this map,

It looks really fun, and absolutely beautiful, but I can't get it to work. I have manually installed almost 400 maps, but this one just doesn't show up on the maplist. I don't know if it is conflicting with a map named " KF-Harbourv3" or not, but it shouldn't be an issue.

Anyway, map looks amazing, if you can figure out why it doesn't show up on the list, do tell me.

It could be a small problem with external static meshes / textures shipping with the map. Make sure you have everything installed in its proper directories.
As for the map, I really like it. It's fun to play around, though the office area is really cramped and once you are in, you get easily pounded. The outside area is much easier to defend.
And it runs great, too!

I even re downloaded the whole thing, set all the files to read only and turned my computer off, and then back on ( that was more of a joke then an actual troubleshoot )

I am completely puzzled by this one.

*don't say setting it to read only was the problem, I tried it five times both ways*